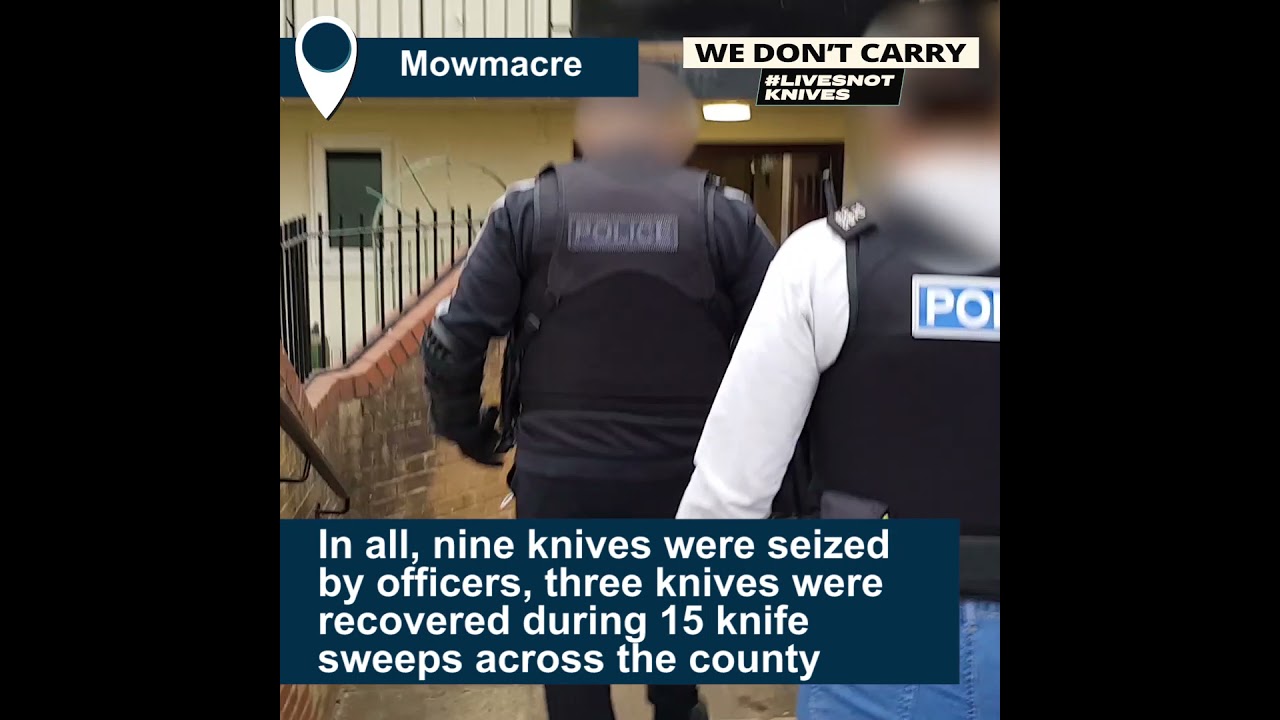 A week-long anti knife crime operation carried out by Leicestershire Police led to 36 arrests and more than 50 knives being taken off the streets. Operation Sceptre formed part of a national intensification campaign by police forces aimed at reducing knife crime by targeting those carrying weapons and disrupting the supply of knives available to use. It led to 36 arrests, 12 of which were directly related to knife crime offences and a quantity of weapons being taken off the s
0

A woman has today been sentenced after being found guilty a second time of the murder of her partner who was killed in 2016. Emma Magson was found guilty of the murder of James Knight in November 2016 and sentenced to life imprisonment ordering her to serve a minimum of 17 years. Following an appeal against her conviction at the Court of Appeal in December 2019, a retrial was ordered which concluded at Birmingham Crown Court on Friday 5 March after eight weeks. The jury in th
0

Woman found guilty of murder of her partner following retrial

A woman has today been found guilty a second time of the murder of her partner who was killed in 2016. Emma Magson was found guilty of the murder of James Knight in November 2016 and sentenced to life imprisonment ordering her to serve a minimum of 17 years. Following an appeal against her conviction at the Court of Appeal in December 2019, a retrial was ordered which concluded at Birmingham Crown Court today (Friday 5 March) after eight weeks. The jury in the second trial f
0

Leicestershire Police has launched the latest phase of its Lives Not Knives campaign with some hard hitting imagery. The imagery, which will appear on buses throughout the city and county, includes a teenager in a mortuary with the words “Killed by his own knife.” Another image depicts a gravestone with the same wording. It’s hoped that by highlighting the consequences, the campaign will prevent people from picking up a knife in the first place. Statistically, those who choos
0

A man in his 20s has been stabbed outside the Good neighbours public house.

Police and East Midlands ambulance service was called to the Good neighbours public house on Aikman Avenue in New Parks around 10pm tonight, to reports of a serious assault. The ambulance was seen leaving the scene at with it’s blue lights flashing, follow by a Police car heading towards New Parks A50. The route to Queens medical Centre in Nottingham. We did have unconfirmed reports after speaking to bystanders that a male had been stabbed. 🔴 Updated News 23:00 Police have
0

Teenager is fighting for his life after being stabbed last night. Officers are appealing for witnesses after a teenager was found with stab wounds in Linford Street, Leicester. Shortly after 6pm yesterday (6 June) police received reports of a small number of men with knives fighting in the Belgrave area of the city. It is believed the fight started in Thurcaston Road before the victim, a 17-year-old boy, was found with serious injuries in Linford Street. He was taken to hospi
0

A Plastic sword was found at the scene Firearms officers were deployed to a car park in Western Park yesterday (Monday 29 April) following a report of a man seen with a sword. “A 33-year-old man has been charged after firearms officers were deployed to Western Park. Igors Jefremovs, of no fixed address, has been charged with one count of possession of a bladed article in a public place and one count of possession of a class B drug. He will appear at Leicester Magistrates’ Cou
0

Man seriously injured after being stabbed

Police are appealing for any witnesses or information. A man suffered serious injuries after he was stabbed during an incident in Kingston Road, Leicester. Officers were called to the scene, near the junction with Evington Road, at around 6pm on Sunday 28 April where the victim, who is in his 20s, was found. He was taken to hospital where he currently remains. His injuries are not believed to be life-threatening. A cordon remains in place at the scene while enquiries continue
0

Man seriously hurt in a stabbing in Leicester

A stabbing on Evington Road at the junction of Kingston Road Leicester, which happened about 6 pm tonight (Sunday 28th April 2019) Large Police presence, bystanders said that a man was stabbed in his head outside on the street early this evening, just outside the side of the Chinese shop on the corner of Kingston Road. Police are combing the Scene of the stabbing and forensics officers are collecting evidence. Police statement: Updated 29/04/19 A man suffered serious injuries
0

Leicestershire Police has been granted an extra £1million to tackle serious violence and the country’s spiralling knife crime epidemic, the county’s Police and Crime Commissioner revealed today. Lord Willy Bach said the force was one of 18 across the country to be granted the Home Office funding boost, which will be immediately invested into “a surge of operational activity” beginning this Easter weekend. Reacting to the news, Willy Bach said: “I’m relieved that our urgent ca
0

Stop the Fighting and Unite (STFU) Leicester City council & Police and Crime Commission made £11,000 award to enable the project here in Leicester. A Project tackling knife crime in Leicester’s communities has been awarded funding both from Leicester’s City Mayor and the region’s Police and Crime Commissioner. Stop the Fighting and Unite (STFU) – a music and multimedia project working with young men to highlight the consequences of violence – is one of the campaigns raising m
0

Police have confirmed that a 17-year-old man was stabbed last night. In a Serious assault on the corner of Evington Road and Rowsley Street (Sunday 24th March 2019) around 9pm A Grey silver car which was parked in Rowsley street just been recovered for forensics testing, a pool of blood could be seen on the road just in front of the drivers door. Two Knife incidents within 20 minutes and on the same road. Are they related ? 20 minutes earlier a Car-Jacking was reported in th
0
1
2